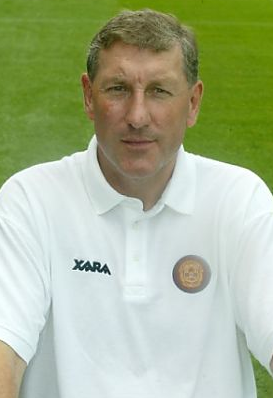 Terry Butcher joined Motherwell as Eric Black’s assistant manager in October 2001. On the 24th April 2002, Motherwell were placed into interim administration by chairman John Boyle which resulted in Eric Black resigning as he stated he couldn’t keep the promises he had made to players due to lack of funds so he felt it was right to immediately depart the club.

Terry took over as temporary manager with immediate effect and he just fell into the role permanently during the fallout of administration in what was one of the most tumultuous periods for the club.

Nobody could deny Terry’s job as Motherwell manager was not going to be an easy one and in his first full season Motherwell finished bottom. The side lost a vast amount of experience as many of the squad were culled from the wage budget before the 2001/02 season had even ended, the 2002/03 season must go down as one of the youngest ‘Well squads in history.

The side did however produce some impressive results, including beating both sides of the old firm, beating Hearts 6-1 and Livingston 6-2 and reaching the semi-final of the Scottish Cup before narrowly losing to Rangers.

During his tenure as manager, the club never played the most glamorous of football but the side battled well with a nice mix of youth and experience and a strong side was built by he and his management team, after the scare in his debut season of potential relegation the additions of Stephen Craigan, Gordon Marshall and Alex Burns helped push the club up the SPL table and relegation was never really a major concern during the Englishman’s tenure, the likes of James McFadden, Stephen Pearson, Stevie Hammell and Keith Lasley all developed into fine footballers with the fee received from the transfer of McFadden to Everton being pivotal in helping the club coming out of administration.

Having led Motherwell out of difficult circumstances, he later enjoyed helping take the club to a League Cup Final despite crashing to a heavy defeat to former club Rangers. At the end of the 2005/06 season he was offered a job in Australia with Sydney FC.

During Terry’s playing career, he played with Ipswich Town and Rangers, before finishing his playing career at Sunderland. He won a host of honours winning a UEFA Cup winner’s medal at Portman Road. He also enjoyed a fine international career notching 77 caps for England. One of which contained the famous hand of God incident at the 1986 World Cup.

His managerial career proved to be a mixed bag with Motherwell and Inverness CT being his successes, he had roles with Coventry City, Sunderland, Sydney FC, Brentford, Hibernian and Newport County which proved to be fruitless experiences. At Easter Road he suffered relegation from the Scottish Premiership in 2013/14 with the introduction of the new playoff system, his Hibees side threw away a 2 goal lead only to lose on penalties at home to Hamilton Accies. His name did come up for the vacant Motherwell job after the departure of Stuart McCall in December 2014, after being interviewed he then asked not to be considered for the role.