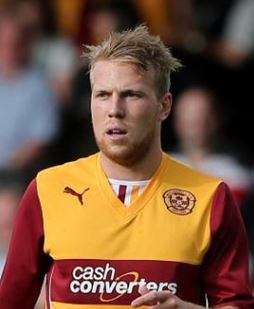 Estonian internationalist Henri Anier joined the club on a 6 month loan deal in July 2013 after initially impressing the management while on trial at Fir Park. Henri was actually recommended to Stuart McCall by former winger Henrik Ojamaa who had just departed the club the month prior.

Anier would make his debut, coming on as a late sub as the ‘Well played host to Russian outfit Kuban Krasnodar in a Europa League tie. He would make his domestic debut only a few days later as Motherwell travelled to Edinburgh on the opening day of the premiership season to face Hibernian, again Henri would be used as a late sub, he would make a great impact in the game as he would score a fine goal which would seal a 1-0 win.

The first half of the season seemed to go well for the Estonian as he struck up a great partnership with John Sutton upfront, Henri had many similar traits to his fellow country man and friend Henrik Ojamaa. He was quick on the ball and certainly had an eye for goal.

In January the club offered Henri a permanent contract after Viking allowed him to leave, Anier would sign a 2 and a half year contract with the Steelmen. Unfortunately his season would somewhat fizzle out as he had to deal with a few niggling injuries including shin splints. After signing his permanent deal most his appearances for the duration of the campaign came from the subs bench as injuries had taken their toll.

Surprisingly in late June 2014 the club announced that Anier had been sold to German Bundesliga 2. side Erzgebirge Aue for an undisclosed fee. Overall he made 37 appearances for the club scoring 9 goals, Henri also won 3 international caps for Estonia while playing at Fir Park.

Somewhat a nomadic player, Henri would later turn out for both Dundee United and Inverness Caledonian Thistle but would suffer back to back relegations from the Premiership with both clubs before moving on to FC Lahti.

As well as being capped at full international level with Estonia, Henri has also been capped with the u19, u21 & u23 sides.