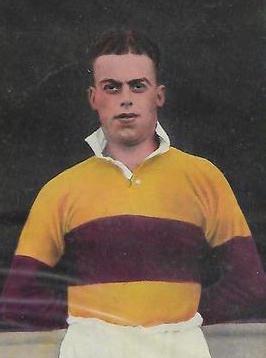 Originally a product of Boys Brigade football, signed from Queen’s Park in 1935, Hutton Bremner was a talented inside right, honoured by amateur Scotland caps and one appearance for the Scottish League against the Irish League alongside Motherwell team mates, Willie McFadyen, Johnny Blair and Tommy McKenzie. Willie McFadyen scored two of Scotland’s three goals in that match. Scored 35 goals in 119 league appearances in his four season at Fir Park culminating in the Scottish Cup final in 1939 against Clyde in which the favourites, Motherwell lost by four goals to nil against the much better Bully Wee side. His brother Gordon would later serve Motherwell, like many other footballers at the time, World War 2 would impact their careers.