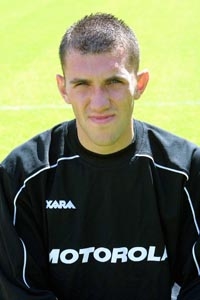 Motherwell born, Mark Brown started his career with Glasgow Rangers where he was only able to count 5 appearances, he was released at the end of 2000/01 season. Billy Davies quickly snapped him up at the beginning of the 2001/02 season and he was to be named first choice keeper. His debut came against Dunfermline at East End Park and Motherwell were defeated 5-2. His last match for the club came on the 15th December 2001, where Motherwell were entertaining Rangers at Fir Park (this game was headlined by former ‘Well manager Alex McLeish just taking over as Rangers manager.) The game finished 2-2, but the 2 Gers goals were blamed on the young keeper and he dropped down to 2nd choice, and then 3rd later on with the arrival of Francois Dubourdeau. Sadly at the end of the season Mark was one of 19 players to be released because the club went into administration.