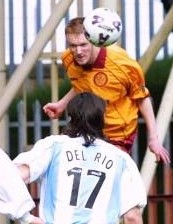 Youngster David Clarke made his ‘Well debut at the end of season 2001/02, this came on the 12th May 2002 against Dundee at Fir Park which Motherwell won 2-1. The club just two weeks prior had went into interim administration and 19 players had lost their jobs. The following season, he made another appearance, this time on the opening day as Motherwell lost 3-2 to Livingston. Despite many academy graduates surviving the administration cull and being thrown in at the deep end with experiencing senior football perhaps earlier than management would have hoped, Clarke made little impression before being released, he fluttered around the lower Scottish League’s and Junior football.