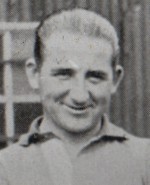 Jimmy joined the club in January 1933, he came direct from local rivals Airdrieonians for a fee of £2,000. The experienced 29 year old joined to cover ‘Well’s right back problems. He made his debut as Motherwell travelled just across the Clyde to play Hamilton Acas in the Scottish Cup as ‘Well ran out 2-0 winners. Motherwell of course would play a further six games in this tournament as the got to the final sadly losing 1-0 to Celtic. Jimmy’s first league appearance saw him line up against Greenock Morton at Chappelow in a match Motherwell won 2-1 partly thanks to Jimmy as he put in a great defensive performance, twice being forced to clear the ball of the line. He finished the 1932/33 season having played in 18 games both league and cup. He retired at the end of the 1933/34 season and tryed a career in insurance but throughout the 1934/35 season injuries to Dowall and Allan meant that Hugh Wales was played at right back, so shortly later Jimmy returned but he would only feature for the reserve side before yet again retiring from the game. He later went on to manage Alloa Athletic and St Johnstone.