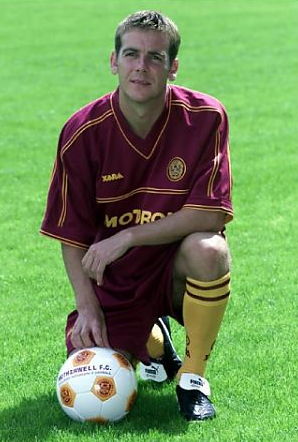 Started out with Dundee, his home town club, but after just a handful of games he was signed by Chelsea. Difficulties in getting a regular first team spot at Chelsea led to a loan spell with Bradford City. Twice signed by manager Alex Miller, first at Hibernian and then at Aberdeen. Billy Davies signed the Aberdeen player of the year on a free transfer after Dow was released by the club. Loads of new faces arrived at Motherwell in the summer of 2001 and it’s probably fair to say that Andy was one of the least exciting, with the likes of Roberto Martinez, Welshman Karl Ready and highly rated former Manchester United reserve Stephen Cosgrove arriving, however Andy looked a good piece of business early on getting on the scoresheet in a 2-2 draw with Kilmarnock and against his former employers Aberdeen, he set up a goal for team mate Karl Ready dinking in a delightful free kick eluding all the dons players and the Welshman made no mistake firing the ball home.

Six games into his ‘Well career he picked up an injury which kept him out for a while. He made a sub appearance a few weeks later. He came back into the first team picture in 2002 when he played in a 2-0 defeat against Celtic at Celtic Park. He also played in the third round of the Scottish Cup against Dunfermline where the Steelmen went down 3-1 this was his last appearance for the club. When Eric Black took over as manager it was clear he wanted to put his own stamp on the squad and he made no secret that he wanted Andy off the wage bill. He would be amongst the 19 players that would be released by the club after they went into administration.