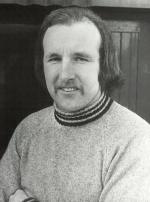 Like Jim Dempsey, Billy Dickson was to make his name away from Motherwell. But whereas Jim made his reputation after leaving Motherwell, it was the opposite for Billy Dickson. Billy was a stalwart in the Kilmarnock side and he was already a Scotland international when he joined the Steelmen in 1974. His move to Motherwell did not work out and he left only counting 12 appearances, 2 coming as a sub.