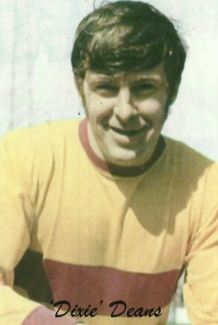 Born in Johnstone on the 30th July 1946, John Kelly Deans began his football career with Neilston in the Juniors where he had become a regular scorer. His goal scoring exploits were that good that he was christened with the nickname ‘Dixie’ after Everton’s famous centre forward William Dixie Dean who was synonymous for scoring in England during the 1930’s

Following on with the departure of Joe McBride to Celtic in June 1965, ‘Well boss Bobby Howitt set about finding an ideal replacement and managed to snag quite a bargain when he signed the Deans in October 1965 for the mere fee of £100. At Neilston ‘Dixie’ managed to score 60 goals in one season which led to numerous clubs wanting his signature which included Newcastle United.

Despite being only 5’ 7”, Deans had a fantastic trait in that he actually had tremendous aerial prowess in that he had the ability to hang in the air timing his headers to absolute precision. His energy and enthusiasm certainly helped quickly win over the ‘Well support.

Deans made his Motherwell debut against Kilmarnock in 1966 as the side fell to a defeat but he would really make his mark during the 1966/67 campaign where he would score 30 league goals setting a new post war record in the process.

Not long after John netted his first hat trick for the club in a tremendous 6-2 win over Dunfermline Athletic at Fir Park he was sent off against Celtic for a tackle on Jimmy Johnstone only a matter of weeks later which was the start of his disciplinary problems. Deans played a pivotal role for the club during the 1968/69 season, as the club had suffered relegation the previous year his 32 goals were crucial in helping the side to an immediate return.

Despite being a fine goalscorer for Motherwell further red cards against Aberdeen, Dunfermline, Hamilton Accies, Clyde and Stoke City made the forward become disillusioned about his future in Lanarkshire due to a growing a bad reputation.

Surprisingly however while serving a six week ban, Jock Stein managed to secure his services for only £17,500, a fee which was much less than they paid for Joe McBride four years prior. The move in fairness seemed to benefit Deans as Stein managed to tame the ferocious forward as his discipline improved quite significantly, it improved that much that in all his time with Celtic he only ever received his marching orders in one game, thus being a reserve fixture.

He made a great impression on his Celtic debut when he scored in a 5-1 win over Partick Thistle, he would go on to enjoy setting many records for the Glasgow side. On one occasion he scored 6 goals past Scotland international keeper Alan Rough in a 8-0 victory over the Firhill club. He made 184 appearances scoring 124 goals in all competitions for Celtic, he always seemed to get on the scoresheet when he played against the Steelmen.

Despite only winning the two caps for Scotland he was unfortunate to miss out on going to the 1974 World Cup as he was in the provisional 40 man squad.

In May 1976, Deans moved to English side Luton Town. After loan spells with Carlise United and Partick Thistle he would move to Australia to play for Adelaide City where he would finish his senior career.