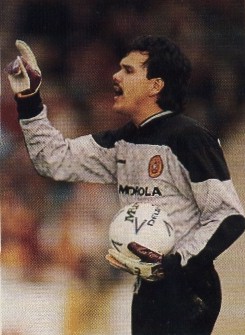 Tommy McLean signed Sieb Dijkstra  in August 1991 from a small Dutch side called Hasselt KSC. He was a commanding keeper and he soon established himself as a Fir Park favourite as he was able to make to pluck crosses out of the air with ease. Sieb was a terrific shot stopper, it wasn’t always plain sailing though as initially he was second choice behind Billy Thomson, the keeper made his debut early in the 1991/92 season when he was selected to face Raith Rovers in a league cup tie, both Dijkstra and the side in general suffered from a dismal performance as the side were beaten 4-1 by First Division Raith Rovers but he bounced back in fine style with a win over Airdrieonians a matter of days later. It wasn’t until the following season that Sieb would become first choice keeper a position he would keep for to seasons. He would prove to be massively popular with the fans as anything that was floated in and around the Dutchman’s box was generally mopped up easily.

Dijkstra left the club on the eve of Alex McLeish’s arrival at the club in July 1994, he joined QPR for £350,000 but life at Loftus Road wasn’t all too enjoyable as appearances were limited and he was farmed out on loan to both Bristol City then Wycombe Wanderers. Later in his career, he joined Tommy McLean’s Dundee United, at Tannadice he nailed down the number one jersey and helped the club to a League Cup final which they lost to Celtic.