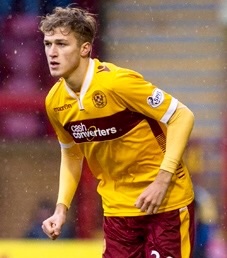 David Ferguson progressed through the Motherwell youth academy. As a teenager he was thrust into the first team scene early in the 2014/15 season due to a number of injury problems in defence. Initially a centre back, Ferguson would make his debut coming on as a substitute against Dundee United filling in a left back as the side fell to a 1-0 defeat at Tannadice, David would however make his first start days later in an equally disappointing 2-0 defeat at the hands of Inverness.

The young defender was in and around the first team for three seasons before the club announced at the end of the 2016/17 season he would not be retained. In truth over his ‘Well career he failed to be anything more than a fringe player, essentially filling in when injuries and suspensions occurred. He was a useful player to have as he could play anywhere in the backline and on occasion he was even deployed in a defensive midfield role.

The club made use of the new development loan system which allowed sides to loan youngsters out to lower league sides but still allow them to play for the clubs under 21 side to monitor their progress, Ferguson enjoyed spells at Alloa Athletic, Annan Athletic and Airdrieonians. When called upon the youngster always gave 100% but with any youth player consistency was the real issue. His inability to really improve his game and command at least a regular spot within the match day squad no doubt was one of the main reasons the club opted not to keep him around. David made 16 appearances for the club, all of which came in league duty.

David was of course part of the Motherwell u21 side which went onto Hampden in 2016 after enjoying a fantastic run in the Scottish Youth Cup where they would beat Hearts 5-2 in a terrific final, Ferguson would net the third ‘well goal in an impressive performance.