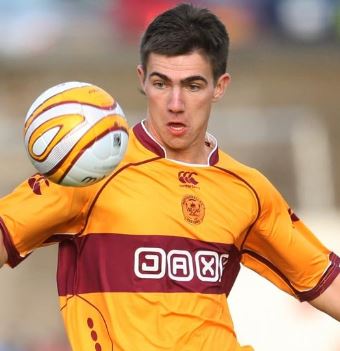 Glasgow born midfielder Ross Forbes progressed through the Motherwell youth ranks. He made his first senior appearances in the game while out on loan to Third Division side Dumbarton in early 2009 and he would play a pivotal role in helping the club with the league title.

The 2009/10 season kicked off early for Motherwell as they had qualified for European competition, but new ‘Well boss Jim Gannon was left with a thread bare squad which meant he had to pitch in a few youngsters to make their debuts, Forbes of course was one of them and the midfielder was given his debut against Welsh outfit Llanelli in a 1-0 defeat in the Europa League.

Forbes would feature quite consistently under Gannon, Ross looked quite impressive in the early European games and scored a number of stunning goals against Flamurtari and Steaua Bucharest, by the time the opening day of the SPL season arrived he had cemented a first team place and looked to be an exciting prospect, he would score a goal of the season contender against St Johnstone in the season opener where he would whip in a beautiful curling effort from the edge of the 18 yard box junction.

He proved to be a great addition to the side, his set piece ability and his magnificent left foot where he could spray about fantastic passes proved to be a wonderful asset, his biggest issue was perhaps his lack of pace. Forbes early season form saw him score against Kilmarnock, Dundee United, Inverness CT, St Mirren and Hearts. It wasn’t too long before he was called up to the Scotland U21 set up and also winsome personal awards with the SPL Young Player of the month for August 2009.

Unfortunately, Ross would struggle to maintain this form as goals started to dry up and his early season form somewhat declined, this was perhaps due to change of management as Jim Gannon moved on and veteran Craig Brown came in. The highlight of the 2010/11 campaign was no doubt when he played a starring role in midfield as ‘Well beat Celtic 2-0 at Fir Park in February 2011. By the time Stuart McCall became the new manager, Forbes started to drift right out the side and he would eventually leave at the end of the 2011/12 season. He was an unused sub in the 2011 Scottish Cup Final.

Ross would eventually sign for Partick Thistle in September 2012 as the pushed for promotion to the SPL, he played in the 2013 Challenge Cup Final with the Jags but he would have to settle for a runners up medal as they were beaten on penalties by Queen of the South. Despite a brief return with Thistle to the Scottish top tier he eventually moved on to Dunfermline Athletic then onto Cappielow with Greenock Morton where he enjoyed a few successful cup runs which included an upset over Motherwell in 2015, a result which ultimately cost Ian Baraclough his job.