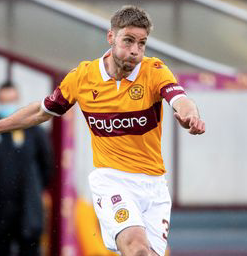 A vastly experienced footballer in the English Football League, Sam Foley was pretty much well into his veteran stages when he arrived at Fir Park in January 2021 after his departure from St Mirren on a free transfer. It was perhaps a tad surprising that he had left Paisley so abruptly as he was a popular player with the fans, he had also served as the club’s captain and won the 2019/20 player of the year but for whatever reason he had fallen out of favour quickly.

Sam had plenty of positive attributes as he was a good dribbler and had a fine range of passing, sadly however a back injury curtailed his time in North Lanarkshire and he was limited to make only five appearances for the club.

His debut came in a 2-1 win over Dundee United when he came on as a substitute in the dying embers of the game. His next appearances would turn out to be exactly two months later in a 5-0 win over Formartine United in a Scottish Cup fixture. Foley would play in the final three league games of the 2020/21 season and he even got on the scoresheet in a 1-2 defeat versus Ross County.

Perhaps not surprising was that he was released at the end of the campaign but he joined English League Two side Tranmere Rovers.

Sam played and scored for St Mirren in the exciting 4-4 Scottish Cup tie at Fir Park during the 2019/20 season where the Buddies eventually advanced by winning the shootout 3-2. ‘Well of course had to rally back as they were 1-4 down at half time.