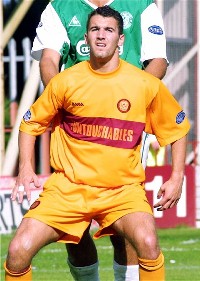 As a teenager Steven Ferguson broke into the senior side at East Fife from the youth ranks in fine style during the 2000/01 when the club were in the Third Division. He made his debut against Albion Rovers and after finding his feet in the senior game he quickly found a knack for scoring which produced a fantastic spell where he scored 9 goals in 8 games which certainly alerted the scouts at many clubs up and down the length and breadth of the UK. Stevie would ultimately be snapped up by English Premiership side Tottenham Hotspur.

Naturally he went straight into the youth setup at White Hart Lane but as the club had no shortage in talent at their disposal the young forward found opportunities limited. It was at the beginning of the 2002/03 season that Stevie joined Motherwell on loan for an initial 6 months, he provided cover for young starlet James McFadden and Dirk Lehmann who were the preferred striking partnership. Ferguson made his debut at Tannadice where he came on as a late sub in a 1-1 draw, he would follow this up with a further four further appearances from the bench but one famous result came during that spell when Motherwell put Celtic to the sword at Fir Park, but Stevie only played a minimal part in that performance.

The young forward finally made his first start for the club with this coming against his former employers East Fife in the League Cup where the ‘Well ran out comfortable 2-0 winners at Bayview. Stevie netted his first goal for the club against Hibernian but it’s a match that’s best forgotten as not only did Motherwell fall to a 3-1 defeat but three players would also see red in a heated contest. He would score again a few weeks later as the club managed to record a stunning 6-1 victory over Hearts at Fir Park.

Early in January 2003 he departed the club having made 21 appearances scoring 2 goals, despite always giving 100% effort he lacked the goal demand necessary to succeed at SPL level. Upon his return to London, he was told he would be allowed to find a new club, it was mentioned that there was a chance of signing for Motherwell permanently, but manager Terry Butcher opted to strengthen other areas of the squad.

Stevie would eventually turn out for Woking in the English Conference where he spent most of his career, he did however have both a loan and permanent spell with the new incarnation of Wimbledon before playing with various lower league English sides.