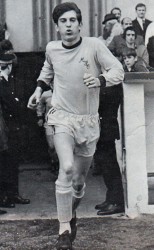 Tom Forsyth was born in Glasgow on the 23rd January 1949. In 1967 Motherwell manager Bobby Howitt signed him from local side Stonehouse Violet and it wouldn’t be too long before the teenager enjoyed some first team action.

On the 14th October 1967 at the age of 18, Tom would make his debut in a 3-1 win over Stirling Albion at Fir Park. Disappointingly, the side slipped to relegation at the end of the 1967/68 season, Forsyth would feature more regularly in a coming of age season for the youngster when the club immediately bounced back to Scotland’s top tier.

Initially deployed in a defensive right-half or inside-right role, manager Howitt eventually used him as an inside forward and enjoyed some success as he chipped in with numerous goals on a regular basis. Tom’s first goal for the club came in a League Cup tie against St Mirren where he intact netted a double on route to an impressive 6-0 win. Forsyth first league goal came on the 21st September 1968 at Ochilview in the 6-1 demolition of Stenhousemuir. However, perhaps the pick of the bunch came in March 1970 when the side played Falkirk, Forsyth went on a weaving run through the Bairns defence before dispatching a rocket shot past the despairing Stuart Rennie from 25 yards.

As time progressed he developed into a fine player, not only did he possess tremendous tacking prowess but he was a real robust unit, Tam also won tackles that he perhaps had no right to win as his timing was perfection. Even with all these attributes playing at the likes of Celtic Park and Ibrox didn’t faze him in the slightest which was all the more impressive when you considered his age and experience.

His ability and form wouldn’t go unnoticed as he was recognised at Under 23 level and full level with the Scotland international side while at Fir Park, furthermore he also represented the Scottish League on a solitary occasion.

Tom made over 200 first team appearances in all competitions for the Steelmen, despite featuring in many memorable moments, ‘Well fans of a certain vintage fondly remember some Texaco Cup games under the Fir Park floodlights in front of big crowds where he played his part in defeating the likes of Tottenham Hotspur who had many internationals in their squad, beating them 3-1 and 5-4 on aggregate certainly ranks up very high.

In October 1972 it was new Rangers boss Jock Wallace who sanctioned his move to Ibrox when they offered Motherwell £40,000 to secure his services. Ironically enough his first appearance for the Govan side was against Motherwell a matter of days later as they recorded a victory. Tom won an abundance of honours in Glasgow, he scored the winner in the 1973 Centenary Scottish Cup Final against arch rivals Celtic which was no doubt a personal highlight. He played over 300 times as a Rangers player and won 21 additional Scottish caps (22 in total).

Quite bizarrely, former Scotland boss Tommy Docherty once referred to Tam “as a carthorse’ but Ally MacLeod showed more faith in his abilities, he played all the games for his country in the rather forgettable 1978 World Cup in Argentina.

After his playing days came to an end he dabbled in coaching, first up was a spell as manager at Dunfermline Athletic but this lasted under twelve months, he eventually linked up with Tommy McLean at Morton as his assistant manager before both arrived at Fir Park. In 10 years at the club the two Tam’s helped the side win the 1991 Scottish Cup, play in Europe for the first time and finished 3rd in the league whilst at the same time putting in a real title challenge. They both departed for Heart of Midlothian in the Summer of 1994.