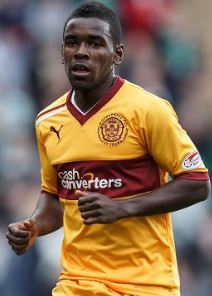 Zaine Francis-Angol signed for the club in 2011 after being released by Tottenham Hotspur, he had been with Spurs since the age of nine. Originally signed for the youth side he was promoted to the first team at the end of the 2011/12 season. Zaine would make his debut for the club in a Champions League tie against Panathinaikos in August 2012, only a matter of weeks later he was called up by the Antigua and Barbuda national side whom he was eligible to play for as it was his mothers country of birth, he would win his first cap against Guatemala.

Capable of playing at either left back or as a left sided winger he provided the side with some adequate cover for the likes of veteran full back Stevie Hammell. Zaine would make almost eighty first team appearances for the club, he played in a side under Stuart McCall which won many plaudits for their quick expansive attacking playing style which brought back to back 2nd place finishes in the league. Sadly however as the side struggled during the 2014/15 season, a number of injury set backs would keep the youngster sidelined for a considerable amount of time and he was released when his contract expired in June 2015. Francis-Angol managed to get on the scoresheet on three occasions for the side, his first was in a 5-1 victory over Partick Thistle at Firhill, his second came against Aberdeen in a 2-2 draw and his third came in an entertaining 3-3 draw with Celtic at Fir Park.

He would later join English National League side Kidderminster Harriers who he served for two seasons before moving to AFC Fylde. Zaine signed for English League One side Accrington Stanley in July 2019.