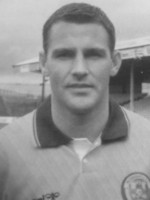 Jim’s dad, played for Motherwell in the 1970’s and Jim arrived on the Fir Park scene some twenty years later to continue the family connection. But in the end of the day it must be said he never quite fulfilled his potential at Motherwell but there were the off signs that he could cause defences real problems. Eventually he went to St Mirren in September 1993, he was part of the deal which brought Paul Lambert to Fir Park.