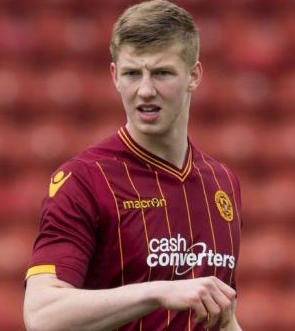 Northern Irish defender Ben Hall joined the club as a teenager from Dungannon Swifts in 2013. He would progress through the Motherwell youth system where he became a solid performer and cemented himself as a regular in the under-20s side.

As an 18 year old he was given a surprise debut mid way through the 2015/16 season, starting at centre back in an impressive 3-1 win over Dundee at Fir Park in December. Motherwell over course had plenty defensive options at their disposal but Mark McGhee hadn’t been happy with the performance of Louis Laing and Kieran Kennedy a few weeks prior as the club fell to a dismal 3-0 defeat at Dingwall.

Ben of course would enjoy a successful start to his Motherwell career as he would follow up his debut by starting in the fantastic 2-1 win over Celtic at Parkhead, this was followed up by netting his first senior goal where he netted a header against St Johnstone in a 2-0 win. If it weren’t for some suspect refereeing in the Lanarkshire Derby he would have enjoyed winning four straight games.

Despite being thrown in at the deep end, the young defender developed well, the raw centre back certainly had all the credentials required, he struck up a fine partnership with veteran Stephen McManus where he seemed to be learning on a constant basis, but as expected with young players consistency did wane at times. Ben would suffer a few injury set backs during the campaign but finished the season helping the club secure a 5th place finish as well as playing in 19 games, not too bad considering he only made his debut in December of that season.

A fantastic achievement that must be noted, Ben played his part in helping the under-20’s side lift the 2016 Scottish Youth Cup for the first time, the young ‘Well side would record an impressive 5-2 win over Hearts at Hampden Park. Unfortunately for Motherwell, Ben’s progress wouldn’t go unnoticed and he would eventually join Brighton and Hove Albion initially linking up with their development side, Motherwell had been in talks over a contract extension for many months but nothing ever materialised.