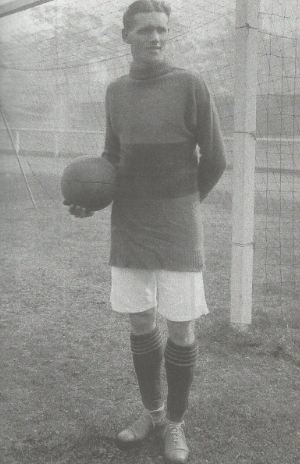 Colin Hampton became the first ‘Well player to win a cap for the Scottish Football League. Colin was selected to play in goals against the Irish in 1912 at Windsor Park in Belfast. He only lost 1 goal in the game, Scotland ran out 3-1 winners. Colin was transferred to Chelsea on 20th April 1914 for £600, quite a considerable fee in those days. His playing days were interrupted by the war and he was to serve as a machine gunner in Mesopotamia. In 1918 his armoured car was shattered by shellfire and Colin was taken prisoner, only to be released with his comrades when the armistice was declared while being marched to Constantinople. Colin was awarded the military medal and after the war returned to playing. His best years with Chelsea were from 1922 to 1924 when he played 28 and 22 games in consecutive seasons. He joined Brechin in 1924 but later returned to London to play for Crystal Palace.