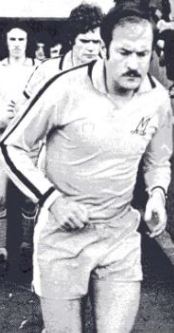 Harry Hood signed for Motherwell in May 1976 from American side San Antonio Thunder. He had played in Scotland before having made his name with Clyde (two spells) and Celtic with one year having been spent with Sunderland.

Hood had spent seven years at Parkhead winning a plethora of domestic honours making over 300 appearances in all competitions as well as having an impressive goal haul which stood at 123. He also held a record for some time, being the last player to have scored a hat trick in an Old Firm which was set during the 1973/74 season and wouldn’t be broken until September 2016.

The forward was a versatile player as not only could he play up top as a striker, but he was equally comfortable playing out wide or in a deeper role. As what generally happens, the veteran arrived at Fir Park to late in his career to make a similar impact to that of what he enjoyed at Parkhead, Hood made his Motherwell debut in the League Cup in a 3-3 draw against Dundee and followed this up with getting his first goal for the club in a 1-4 defeat against Hearts three days later.

Harry featured sporadically over the 1976/77 season, he made 19 appearances in all competitions scoring just the solitary goal.  He struggled to impose himself at Fir Park and by the time the season went into March he vanished completely from the first team scene. It was clear he did possess quality but not enough to command a regular starting berth. In 1977 he moved onto Queen of the South, after one season at Palmerston Park he tried his hand at management having brief spells with Albion Rovers before returning to The Doonhamers.

After his football career finished he started his own company Lisini Pub Co, which owns and runs several pubs and restaurants in the Lanarkshire area including the Dalziel Park Hotel which is located right next to Motherwell’s current training ground.