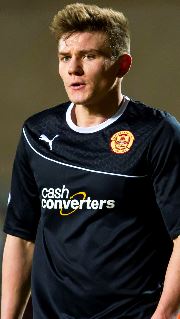 Shaun Hutchinson began his football career with the famous Wallsend Boys Club in Newcastle, which had already produced an impressive array of talent which included Alan Shearer, Steve Bruce, Peter Beardsley & Michael Carrick amongst others. The big Geordie would join Motherwell at the age of 16 where he joined the clubs youth setup.

It was under Mark McGhee, that hutchy would make his first team debut, he slotted in at left back as ‘well-travelled to New Douglas Park to play Hamilton on the 16th May 2009, with the Steelmen running out 3-0 winners.

Under the tutelage of new manager Jim Gannon, Shaun started the 2009/10 campaign brightly, Gannon seemed to prefer giving his younger players a chance in favour of playing his experienced pros. Shaun would feature in an early season European match against Albanian side Flamurtari where Motherwell recorded a fantastic 8-1 victory, he would also score his first senior goal for the club in this match.

The start to his SPL career was also quite impressive as he would score in back to back fixtures in the opening weeks against both St Johnstone & Kilmarnock, Hutchinson looked a real prospect as he was dangerous from set pieces and never shyed away from meaty tackles, he quickly became a favourite with the fans with his willingness to get stuck right into the opposition.

Sadly he would suffer from injury which would curtail the rest of his season. His form had attracted the interest of England u21 scouts who were eager to see him play but it proved to be a massive disappointment all round as he suffered a lengthy layoff. Around December 2009 he was all set to go on a short term loan to Ayr United in order to get back some match sharpness but due to adverse weather and many postponements this move was scuppered. Somewhat surprisingly Shaun was back in the side which travelled to Ibrox on the 19th December, despite getting back on the scoresheet, Motherwell suffered from a bad day at the office and were soundly beaten 6-1. It wouldn’t be until over a year later until we would see Shaun featuring in a first team game as injury’s would initially hamper his progress and when he returned to fitness he seemed to have fallen down the pecking order.

After Mark Reynolds departed the club for Sheffield Wednesday in January 2011, Stuart McCall thrust the Englishman back into the first team picture where he put in a solid performance in a 0-0 draw against Inverness and it was from this point on he would go on to cement his place in the first team. Shaun would enjoy a degree of success over his career at Fir Park as he forged a strong centre back partnership with the likes of Stephen Craigan, Stephen McManus, Adam Cummins & Tim Clancy.

In 2011 he was a Scottish Cup runners up & in three successive years he helped the club achieve best of the rest finishes in the SPL/Premiership. At the end of the 2012/13 season alongside team mates Darren Randolph, Michael Higdon & Nicky Law he was named in the SPL “team of the season”.

Nicknamed ‘the heid’ by his team mates after a training ground incident where he was said to have headed a goal post at full force trying to make a clearance. Hutch had actually began his career as a midfielder but reverted to being a defender due to his physical size and his no nonsense style.

In June 2014 he signed for English Championship club Fulham in a free transfer and as luck would have it the clubs were actually scheduled to meet in a pre-season fixture at Fir Park, Shaun would enjoy a winning return to Fir Park as the cottagers would record a 2-0 win, it did however give the ‘well fans a chance to say goodbye to a former favourite.