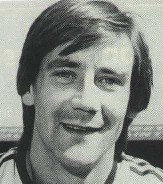 Born in Whitburn on the 26th May 1956, Willie Irvine’s senior career began at Parkhead with Celtic, signing for Jock Stein in 1972 as a 16 year old. Willie was nicknamed ‘noddy’ because of his unusual running style. Due to the difficulty trying to break into a Celtic team that had an abundance go talent, Stein farmed him out on loan to Whitburn Juniors. In 1975 he departed Parkhead having failed to break through into the first team, Willie went on to play for Junior outfit Fauldhouse United before coming back into professional football with Alloa Athletic.

Having netted an impressive 29 goals at Recreation Park his form didn’t go unnoticed and Motherwell paid out £25,000 to secure his services in 1979. In the promotion winning season 1981/82, Irvine was the ‘Well’s top scorer with a fine 21 goal haul, but like manager Davie Hay he would depart Lanarkshire over the summer opting to head to Edinburgh where he joined Hibernian.