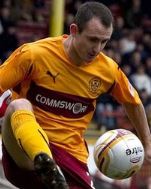 Stuart McCall signed striker Francis Jeffers on a short term deal in February 2011 as he was keen to bolster his attacking options having just missed out on signing Danny Cadamarteri who had agreed to join Huddersfield Town. Jeffers had started his career with hometown club Everton where he made his debut at the age of 16 at Old Trafford against Manchester United. He showed lots of early promise and would score 20 goals in 60 games for the toffees.

Jeffers caught the eye of Arsenal manager Arsene Wenger who dubbed him a “fox in the box” & subsequently signed him for the gunners for 8 million pounds. Unfortunately his time in London was hampered with injuries and he struggled to live up to the “fox in the box” tag.

By the time he joined the Steelmen in early 2011 it seemed as if his career was winding down, goals seemed to have dried up as he had failed to live up to big transfer fees as well as injuries playing havoc.

Jeffers made his ‘well debut as a substitute in a 6-0 loss against his former employers Rangers at Ibrox. In his first start for the club he would however put in an impressive showing in a fine 2-1 against Aberdeen at Pittodrie and he even got on the scoresheet. It was clear to see why a lot of big clubs had taken a gamble on him, he produced a few moments of quality in his brief time at Fir Park but sadly he just seemed to lack the consistency which was needed, Francis would play a vital role in the clubs progress to the 2011 Scottish Cup final where he put in great performances in the quarter final games against Dundee United, where he netted in the replay as Motherwell won 3-0. Jeffers also played a key role in the semi-final vs St Johnstone where he set up John Sutton’s fantastic long range goal. He would feature in the final itself but sadly he would have to settle for a runners up medal.

As the season came to a close, Francis had made it clear he fancied a return to England where he hoped to find a club in the championship but he eventually signed a one year deal with Australian club Newcastle Jets whom he played for before arriving at Motherwell. Jeffers had made 14 appearances for the Steelmen netting twice.

At International level, Francis has one full cap for England, which he won against Australia in a 3-1 defeat, he did however get on the scoresheet. He has also been capped at u21 level.