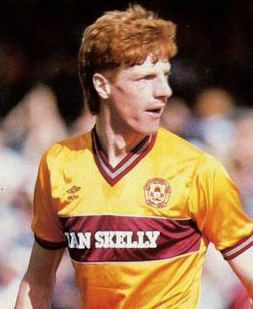 Born in Irvine in June 1963, red-haired Alex Kennedy arrived at Motherwell in 1983 when he was plucked from Ayrshire Junior football as he was playing for a club called Craigmark Burntonians.

Comfortable at playing in defence or midfield, Alex possessed a good footballing brain, his height and athletic ability made him a usual player to have, he coped fine with the physical demands of Scottish football. Kennedy had all the tools required to make a success in football and perhaps should have achieved more than he actually did.

Alex made over eighty appearances in claret and amber scoring 6 goals. It was under the guidance of Tommy McLean that he broke into the side and he played his part in the side that won the 1984/85 First Division bouncing back to the top tier of Scottish football at the first attempt.

In 1989 Partick Thistle paid the club £30,000 to secure his services, but in 1992 he made his way back to the Ayrshire Junior scene when he signed for Glenafton Athletic.