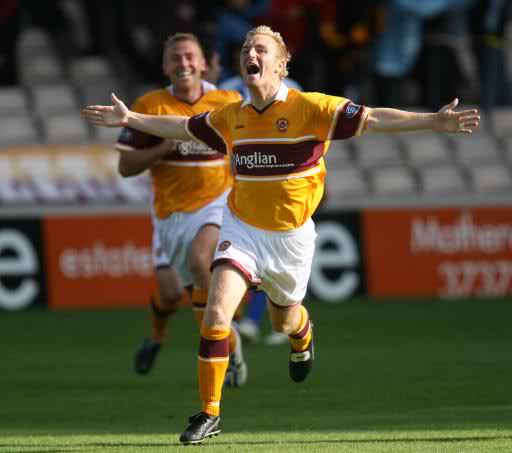 A local lad Brian Kerr was born and brought up in Motherwell but when he got his break as a footballer it was with English Premier League club Newcastle United who he opted to join. Unable to make the breakthrough into the first team picture down at Tyneside, he was loaned out to SPL club Livingston for the 2003/04 season.

While on his return to Scotland, he showed up quite well and proved to be a good addition to Livi’s squad but his stay would sadly be cut short as he was involved in an accidental collision with Motherwell’s Steven Craig at Fir Park. Brian landed awkwardly and as it transpired later he had broken his leg.

Before the 2003/04 campaign was out, he managed to win a few caps for Scotland caps when Berti Vogts was in charge and he attracted interest from German clubs Borussia Dortmund and Bayer Leverkusen at the same time. So when he chose to sign for Motherwell in June 2004 this was a surprise to many.

Brian would suffer a major injury setback weeks after signing as he damaged an anterior cruciate ligament against St Mirren in a pre season friendly which kept him on the sidelines for almost nine months.

The midfielder would miss out on the clubs run to the 2005 League Cup Final, he would however get a run in the last few months of the season making his debut against Aberdeen in April as the side recorded a 3-1 win. Despite the injury misery he had endured he would enjoy one highlight as the season came to a close playing a pivotal role in a ‘Well side that denied Celtic the SPL title.

He proved to be a neat and tidy midfielder who chipped in with the occasional spectacular goal. Kerr put his injury problems behind him and became a regular during the 2005/06 season onwards. Brian would net his first goal on the opening day of the season with an outrageous effort against Celtic in a 4-4 draw. Despite not being a regular scorer he did net a trio of efforts in three successive games in late 2005 scoring against Dunfermline Athletic, Kilmarnock and a winner against Aberdeen in a League Cup Quarter Final tie.

His final season with the club proved to be a struggle for the side as a whole as under the leadership of manager Maurice Malpas relegation was narrowly avoided. As Brian departed Lanarkshire to join Hibernian in the Summer of 2007 he was critical of the club on his departure, stating that Motherwell will always be a selling club and that Malpas had been put in an impossible position.

At Easter Road he couldn’t have asked for a better start as he scored the winner after just two minutes in a Edinburgh Derby at Tynecastle on the opening day of the season. Despite endearing himself to the Hibee’s fans in the best possible way he struggled to replicate his form that he produced in Lanarkshire and was released just over a year later as the Leith side switched managers.

Brian would link up with Terry Butcher briefly at Inverness CT before serving Dundee and Arbroath. After his playing days were over he enjoyed a spell at Motherwell as a youth coach before managing Albion Rovers then Lowland League side East Kilbride. In October 2018 he joined Partick Thistle as Gary Caldwell’s assistant manager.