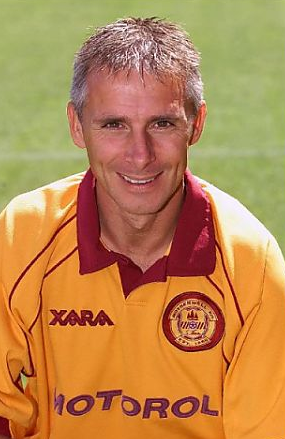 Signed by Billy Davies at the start of season 2001/02, David Kelly (known by the nickname Ned Kelly) was well into the veteran stages of his career when he arrived at Fir Park, aged 36 he signed a one year deal with the club, he had been a team mate with Davies a decade earlier at Leicester City.

David scored on the opening day of the season against Dunfermline Athletic in a match where the Pars hammered Motherwell 5-2. He enjoyed some good early season scoring form scoring against Hearts, Aberdeen and Hibernian, Kelly proved to be a bit of a penalty expert, scoring three penalties out of three in his time at Fir Park.

After a Scottish Cup Third Round defeat by Dunfermline Athletic at East End Park, David was involved in a dressing room bust-up with manager, Eric Black and his assistant, Terry Butcher which ended up with the Irishman’s contract being terminated in January 2002. He left the club having played 21 games and netting seven times. In his short time with the Steelmen, he only missed three games, not bad for a 36 year old. In February he joined Mansfield Town in Division Three in England before retiring after a brief spell with Derry City.

Kelly went into coaching after his playing days ended serving the likes Tranmere Rovers, Sheffield United and linked up with Billy Davies again at Derby County and Preston North End.