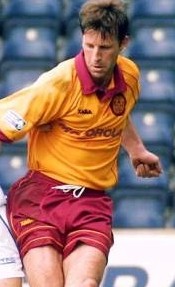 Dirk Lehmann signed for the club on 18th January 2002 and his debut came the following day as Motherwell travelled to East End Park to play Dunfermline Athletic. He came off the bench late on and set up the ‘Well goal. The final score was Dunfermline 3 Motherwell 1. His first ‘Well goal came in his home debut as Motherwell defeated Kilmarnock 2-0. When the club went into interim administration in April 2002. 19 Motherwell players lost their jobs. Dirk could have been one of them, but he accepted a pay cut and he remained at the club for a further year.

Throughout the 2002/03 season, Dirk partnered the young James McFadden up front. On one occasion, Dirk was played at centre back and this came on 30th November 2002 as the side took on Celtic at Parkhead, but it was a 3-1 reversal. Lehmann netted the ‘Well goal. His final appearance came on 10th May 2003 against his old club Hibernian, there were two games left in the season, Terry Butcher seemed to prefer young David Clarkson and Steven Craig in front of him. He was a hugely popular player with the ‘Well fans and was a sad day seeing him leave.