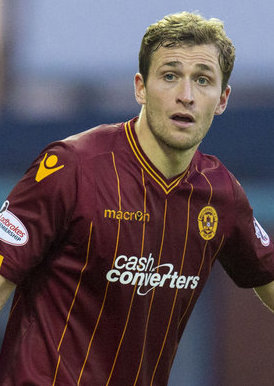 Brother of former ‘Well midfielder Nicky Law, Josh signed a one year deal with Motherwell on the 21st May 2014 joining on a free transfer from English side Alfreton Town, a club where his father was manager.

Josh would make his debut for Motherwell in a European tie against Icelandic opposition in the shape of Stjarnan, on a personal note it was a debut to remember as he scored both goals in a 2-2 draw, but in truth it gave the fans a false sense of what was to come. At previous clubs Josh has often featured in the right full back berth or in a central midfield role but manager Stuart McCall often deployed him in a left attacking midfield role, much like his brother had done with great success only a few seasons previously.

In truth he struggled to make any real impact in that role and as the side struggled in the league Josh found himself one of the main targets of the boo boys. He would of course be moved to his more natural position after the departure of Stuart McCall. Perhaps not the most gifted of players but you could always rely on him to give 100% to the cause. His two seasons at Fir Park provided a mixed bag as the club fought against relegation, he did however feature in both legs of the classic Playoff Final where Motherwell beat Rangers 6-1 on aggregate.

Despite having a year left to run on his contract at the end of the 2015/16 campaign he requested a move due to family reasons. His next club Oldham Athletic would have a number of Motherwell connections as his old management team of Stephen Robinson and Ian Baraclough had taken the reigns at Boundary Park, additionally a few old colleagues Lee Erwin and Connor Ripley were also on the books.