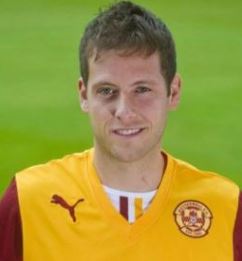 Perhaps better known for his spell with Ross County rather than any of the other clubs he has represented.

Paul Lawson began his career with Celtic and was a player who was tipped to have a bright future as he progressed through all levels a Parkhead before becoming the captain of their reserve side, furthermore Paul became a regular for the Scotland u21 national side winning ten caps in all.

As often is the case with youngsters who play for Celtic, first team opportunities are often limited and indeed Lawson would only make a handful of appearances for the first team before being released in 2007, he had however played for both St Mirren and St Johnstone on short loans.

When Paul moved to Dingwall he dropped down to the 2nd Division, but he would play a pivotal role in helping the Staggies progress all the way to the SPL, also enjoying some cup success by winning the 2010 Challenge Cup and appearing in the 2010 Scottish Cup Final which they lost 3-0 to Dundee United, but the run to the final included a number of impressive scalps which included disposing of both Hibernian and Celtic.

The Midfielder signed for Motherwell on the 1st June 2013 on a free transfer, Paul would make his debut in the Europa League as Motherwell fell to a 2-0 home defeat at the hands of Kuban Krasnodar.

His early days at Fir Park would see him struggle to pick up any form and he would quickly lose his place to Stuart Carswell who struck up a great partnership with Keith Lasley. Despite failing to cement a first team berth during the 2013/14 campaign it was successful for the club as they would finish 2nd in the league. The following season Paul would suffer a number of injuries which would limit him to making only four appearances, he was allowed to leave the club at the end of the 2014/15 season. He made 26 appearances in all competitions for the club.