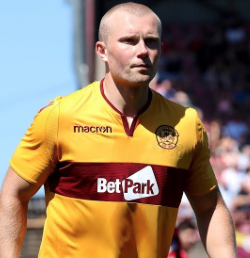 As a 15 year old he made his professional debut with Darlington becoming the youngest player to represent the club in a competitive match as the Quakers beat Peterborough United 2-0. Curtis would go onto serve Middlesbrough, Doncaster Rovers, Oldham Athletic and Portsmouth where he won the EFL League Two championship trophy in 2016/17.

When Main arrived in Lanarkshire there were a few concerns from fans about his scoring feats as he hadn’t really set the heather on fire at any of his previous clubs in-regards to a big goal haul. He joined Motherwell as the free scoring favourite Louis Moult moved to English Championship club Preston North End so the pressure was on Curtis to deliver the goods immediately.

He would prove to be a strong and robust forward, comfortable with the ball on the deck or in the air, when not on the scoring front the general chaos factor he created proved to be quite valuable. Curtis would make his debut on the 20th January 2018 in a 2-0 win in a Scottish Cup tie against Hamilton, only to follow this up with his first goal in a 2-0 win over Ross County four days later.

Almost immediately he hit a rich vein of form enjoying goals against Hibernian, Hearts and St Johnstone but the most notable contribution came when he notched a brace against Aberdeen in a Scottish Cup Semi Final at Hampden. The third goal in the game from Main was quite magnificent, as the Dons pushed forward in search of a goal to get them back in the tie, ‘Well midfielder Andy Rose sent a long clearance up field, when the Aberdeen defender tried to clear it, the ball whacked off of Main and sent him through on goal, one on one with Joe Lewis there was only going to be one winner as Curtis slotted the ball home sparking mass bedlam amongst the Motherwell support. Ultimately however he would need to settle for a runners up medal as Celtic would beat the side 2-0 in the final.

Despite becoming a popular player, his goals somewhat dried up the following campaign. He provided the perfect foil for wingers Gboly Ariyibi and Jake Hastie as well as attacking midfielder David Turnbull. A new contract was on the table at the end of the 2018/19 season but he opted to head north to sign for Aberdeen, Main played in 58 competitive matches for the Steelmen but only netted 14 goals.