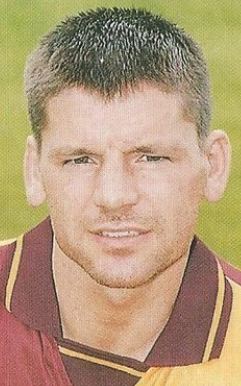 Alex McLeish signed Eddie May from Falkirk in 1994, in a deal which saw ‘Well favourites Paul McGrillen and Stevie Kirk plus £150,000 go in Falkirk’s direction in a deal which is viewed as perhaps one of the worst transfers in the clubs history, McGrillen of course was a young striker who had always been on the cusp of being a regular for the club and Kirk of course was the clubs cup hero from the 1991 cup run, so the pressure was on May to instantly deliver before he had even kicked a ball in claret and amber.

It seemed like he was always going to be on a hiding to nothing. Eddie had put in a number of impressive performances at Brockville as an attacking midfielder which obviously had a number of other clubs looking to secure his services, at Fir Park manager Alex McLeish often deployed him out of position playing more or less in a defensive full back position. His commitment was never in question but he was seen as one of the main villains by many fans as Tommy McLean’s exciting attacking side was disassembled by McLeish.

Billy Davies eventually sold him off in August 1999, he joined Dunfermline Athletic. Later in his career he went into management taking the reigns of Falkirk in the SPL during the 2009/10 season but the Bairns struggled which led to Eddies dismissal. After the experience he stated that he wasn’t interested in managing another club again preferring to just stick to coaching roles.