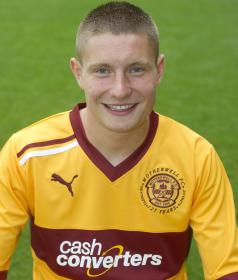 Euan Murray progressed through the Motherwell youth system, he would make only a handful of appearances for the club before departing at the end of the 2013/14 season. Euan made his debut against Dundee United on the 9th November 2013, numerous injury’s had taken their toll on the ‘Well’s defence so it gave the youngster a chance to sample some first team action, coming on as a second half substitute, Dundee United would run riot and win the game 0-4, in fairness to Murray the damage had already been inflicted before he stepped on to the pitch.

He would also feature in a fine 4-1 victory over Hearts and an entertaining 3-3 draw against Hibernian at Easter Road. Despite only making the three appearances for the club he showed he was a versatile player as he would feature in both full back positions and as a centre back. Euan would go onto serve Clyde, Western United in the Solomon Islands, Stenhousemuir, Barrow, Southport, Raith Rovers and Dunfermline Athletic, a man of many clubs who was still in his mid twenties.