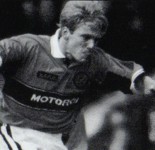 The son of former Hibernian and Aberdeen manager Alex Miller, Greg Miller signed on a free transfer from Livingston in 1998 by Harri Kampman.

The young forward would struggle to make the breakthrough in the Motherwell first team as he would only make six appearances, five of which came from the subs bench.

He was perhaps unfortunate that the club was going through a transitional period in that he was signed by Finnish manager Kampman who reshaped the playing squad from top to bottom during the 1998/99 pre-season. When Billy Davies took over the role only a matter of months after Miller joined he quickly found himself out of favour as expensive signings arrived when new chairman John Boyle set out to make the club the third force in Scottish football.

Greg spent the majority of his playing career in the lower leagues where he represented Clydebank, Brechin City and Arbroath. He became a coach at Easter Road with Hibernian upon retiring from the game.