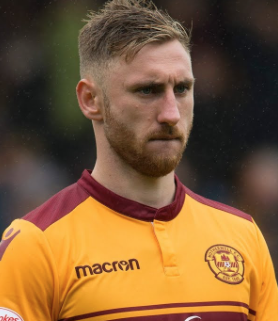 Born in Stoke on Trent in May 1992, Louis Moult arrived at Fir Park as a 23 year old, he is perhaps best described as an older head on young shoulders as the striker had experienced some personal tragedy at a young age as well as having served quite a number of clubs as he tried to find his way in the game. The Englishman had progressed through the Stoke City Academy and actually made his debut as a 17 year old in the Premiership, he struggled to make a consistent breakthrough into the Potters first team despite impressing for the reserves side, he was loaned out to the like of Bradford City, Mansfield Town, Accrington Stanley and finally Alfreton Town with the sole purpose of aiding his development and giving hime some vital experience.

Moult had found the goal trail with Nuneaton Town but it was his spell at Wrexham which alerted the attention of the Motherwell scouting staff. When Louis arrived at Motherwell he had already gained his B licence coaching badge and had actually been a coach with his former club Stoke, quite impressive seeing he accomplished this by the time he reached 23 years of age. It was manager Ian Baraclough that signed him for Wrexham in June 2015 for an undisclosed fee.

Over his two and a half years with the club he would become an immensely popular figure. Not only was he a fantastic finisher but his work rate and exemplary attitude quickly won him many admirers. Louis made his ‘Well debut on the opening fixture of the 2015/16 season versus Inverness CT in a 1-0 win.

After he scored his first goal for the club versus St Johnstone in August 2015 he wouldn’t look back as he helped a struggling side go from potential relegation candidates to challenging for the top six in the league which was achieved largely in part due to his goal haul. Perhaps most notable in his debut season was scoring a nice double against Celtic at Parkhead to clinch a rare 2-1 victory as well as a late winner against high flying Aberdeen. Louis had a fantastic range of goals from scoring simple tap in’s to the utterly outrageous.

His goals no doubt helped the club to survival during the 2016/17 season where he matched the 18 goal haul that he had achieved in his debut season. He throughly enjoyed netting a quadruple against Hamilton Accies in a Lanarkshire Derby that finished 4-2 to the Steelmen, he also scored a sublime effort against Celtic where a long ball was played from defence and Moult timed the ball to perfection hitting it first time which looped over Craig Gordon.

During the 2017/18 season, he started taking free kicks and showed some fantastic ability as he scored some tremendous efforts against Queen’s Park and Greenock Morton in the League Cup. Louis played a pivotal role in helping the side reach the Final of the League Cup as his performances and goals against Aberdeen and Rangers secured a 3-0 and 2-0 win respectively, his goal at Hampden against the side from Govan will live long in the memory of the ‘Well support not only for his stunning lob over the stricken Jak Alnwick but the ensuing celebrations in the stands.

By the time the League Cup Final had come around in November 2017 he had already notched 13 goals that season taking his ‘Well career total to 49 goals in 98 appearances. Sadly however he would have to settle for a runners up medal as Celtic secured a 2-0 win. The game was particularly marred by the antics of Celtic’s Scott Sinclair who dived to win a penalty, not only did they score from it but ‘Well defender Kipre saw red which killed off the tie. Moult of course came close to scoring but was denied from a stunning point blank save and a late free kick his the post.

That season Louis had scored a number of fine goals including a wonderful first time effort against Hearts which curled into the top corner, a vital double against Hibernian at Easter Road which helped the side come back from being two down and a double against Aberdeen at Pittodrie which secured a 2-0 win.

With six months left in his contract, it was felt that the club would hold onto him for the rest of the season and he would likely leave in the summer for free but as it transpired English Championship outfit Preston North End would secure his services in January 2018 for an undisclosed fee. Louis was one of the most popular players in modern times to play for the club, not only for his goal haul but for his work rate and effort when things may not have been going in favour of the side.