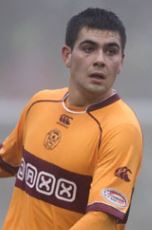 Midfielder, Steven Meechan progressed through the club’s youth system. He was a surprise inclusion on the team sheet when manager Jim Gannon handed him a starting debut against Celtic in December 2009. The youngster put in a great shift and never looked out of place playing the entire 90 minutes, disappointingly Celtic would win 3-2 snatching a late winner. Steven would complete an Old Firm double as he made a substitute appearance at Ibrox against Rangers but on this occasion the side went down to a heavy 6-1 defeat. With new management in place not so long later Steven would go back to the reserve and he would find first team chances extremely limited. At the start of the 2010/11 season he was loaned out to Albion Rovers but after only a handful of games he would struggle with injury. He was offered to extend his loan with the Wee Rovers until the end of the season but with Motherwell yet again changing management Steven declined the offer as he wanted to come back to Fir Park in hope of fighting for a first team slot. He would make a few fleeting sub appearances but would be released at the start of June 2011. Steven would join English Blue Square Premier League club Kettering Town before heading to Scottish junior outfit Kirkintilloch Rob Roy.