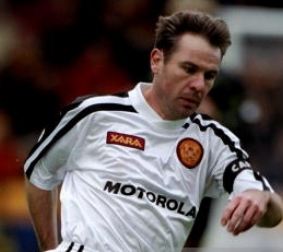 Brian McClair left university for life as a professional footballer. However, he failed to make the grade at his first club, Aston Villa. The Bellshill-born forward moved to Motherwell at the start of the season 1981/82. He went on to score 15 goals in 39 league appearances for the ‘Well. McClair also earned 30 Scotland Caps but was criticised for not recreating his club form in the dark blue jersey. Arrived at Fir Park on a free transfer from Villa Park. Celtic paid £100,000 for him in the summer of 1983. From there, he moved to Manchester United in July 1987 for £850,000. He held the Premier League scoring record with 35 goals, this was jointly matched with Celtic’s Henrik Larsson. He was the first player since George Best to score 20 league goals in a season for United. He re-joined Motherwell in the summer of 1998 and was quickly installed as Captain but he never quite re-established his old reputation and when Blackburn Rovers asked him to be their assistant manager, he returned to Lancashire.