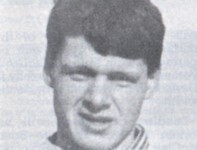 Stephen began his football career in his hometown with Hillstreet Boys Club. Next up came Belfast club, Linfield where he stayed for three years, he scored well over sixty for the Linfield Swifts reserves. On Christmas Eve 1983, Stephen made a remarkable debut for the Windsor Park senior team scoring four goals against Larne. After eight games and five goals for the Belfast club, he moved to Motherwell late in January 1984 when he was just 19 years old. It also cost £15,000 to persuade Linfield to part with him. His first appearance for Motherwell was as a sub on 4th February 1984 in a 2-1 defeat. Altogether, he was on the bench on five occasions in 1983/84. Following Tommy McLean’s arrival as manager, Stephen was allowed to return to Linfield early in the 1984/85 season.