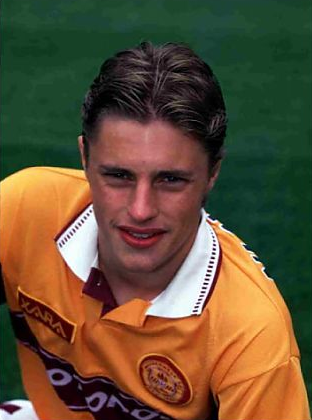 Born in Stirling, it was actually with his hometown team Stirling Albion that Stephen Nicholas made his senior breakthrough. At just 17 years old, the young forward was putting in some fine performances while playing under the tutelage of former ‘Well favourite John Philliben who was a player/manager at Stirling and had built a side that had plenty Motherwell connections as former defender Brian Martin and a number of ex youth players in the shape of Garry Gow, David Bell and David McCallum were on the books at Forthbank Stadium at the same time.

As fate would have it, after an impressive Scottish Cup run during the 1998/99 season, Motherwell drew Stirling out the hat and despite the Steelmen winning 2-0, the performance of Nicholas prompted manager Billy Davies to part with £100,000 to sign him, he became Stirling’s most expensive player sold, formerly it had been John Philliben.

Stephen made his Motherwell debut in March 1999 as a 90th minute Shaun Teale penalty was enough to salvage a 1-1 draw against Aberdeen at Fir Park.  He failed to command a regular staring berth with the Steelmen as 52 of his 66 appearances came from being a substitute. His first goal for the club came in a 1-5 reversal at the hands of Rangers, despite his long range effort striking off Lee McCulloch on route to goal he was still credited with the consolation.

After the departure of Billy Davies early in the 2001/02 season, caretaker managers John Philliben and Miodrag Krivokapic used Stevie frequently in there sides and it was perhaps around this time he enjoyed his best run of form for the side, a particular highlight of course was scoring a double in a fine win against St Johnstone as both clubs certainly looked like they were in for a relegation scrap. Sadly however his career at Motherwell ended on a sad note as he was one of the many players who lost there job when the club were placed into interim administration.

Nicholas would make a return to Stirling Albion, without making any real impact the rest of his career would be spent in the lower Scottish leagues turning out for the likes of East Fife, Partick Thistle, Alloa Athletic, Queen’s Park, Montrose and Stranraer with a brief loan spell at English side Northwich Victoria.