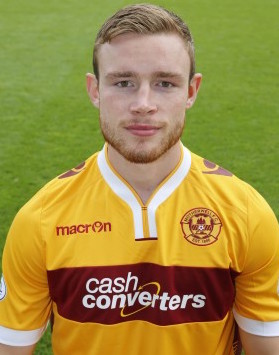 Much was expected of young central defender Mark O’Brien when he joined Motherwell on a 6 month loan deal from English Championship side Derby County. Having broke into the side as a teenager at Pride Park, a heart ailment and ligament injuries would hamper the young Irishman’s progress but he had managed to rack up 35 first team appearances for the Rams.

Mark joined the Steelmen early in the 2014/15 season when manager Stuart McCall looked to bolster his defensive options but in truth the season as a whole would be massively disappointing as the side would spend the entire campaign fighting against relegation. O’Brien made his first team debut in a 1-0 defeat at the hands of St Johnstone.

His initial loan spell he was a regular fixture in the squad but he really struggled to make his mark, not blessed with great pace he would often revert to a long ball game it proved somewhat surprising that new manager Ian Baraclough extended his loan deal as he looked to make his own mark on the squad. Mark lost his place in the side when the preferred partnership of Stephen McManus and Louis Laing was used in the latter part of the season.

He was involved in somewhat a bizarre incident in a mid week Lanarkshire Derby – League Cup tie when he was sent off in extra time, after a robust challenge the referee proceeded to hand out his first yellow card to O’Brien swiftly followed by a red much to the surprise of the travelling support. As it later transpired, just before the ref had blown for half time earlier in the match, there had been a challenge by Mark on an Accies player, for what ever reason the ref decided to leave this unpunished before deciding otherwise by going into the ‘Well dressing room to inform him he had been booked.

Upon his return to Derby County he was released and would eventually join Luton Town, but his game time was limited which seen him drop out the top leagues in England to go on loan with Southport.

O’Brien managed to hit the headlines in England briefly for one of those exciting end of season moments on the final day of the 2016/17 season when his crisp last gasp volley saved his Newport County side from dropping out the Football League.

Mark has been capped by Republic of Ireland at u17 and u19 level.