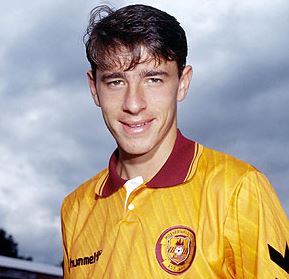 Born in Bellshill on the 25th March 1972, Phil O’Donnell grew up across the Clyde in Hamilton. Joining Motherwell as a youngster he would progress through the clubs youth setup under the stern guidance of Bobby Jenks and manager Tommy McLean.

Phil made his first team bow as an 18 year old on the 24th November 1990 against St Mirren in a 1-1 draw at Fir Park. In truth he had a difficult afternoon against a robust side, despite the tough match little did ‘Well fans know the impact he would have in the near future. He immediately went back to play for the reserves but two months later he would re-emerge for the first team in February 1991 when he played in a defeat against Rangers at Ibrox, however from this point going forward he would be a regular fixture in the Motherwell first team up until his departure just over three years later.

The more first team games he played the better he got and he quickly matured into a fine midfielder. O’Donnell developed a great understanding on the left side of the pitch with full back Tom Boyd and forward Davie Cooper which would caused the opposition many headaches. Phil possessed a great engine, his surging runs were always a joy to behold and he became a real box to box player.

He couldn’t have picked a better moment to score his first goal for the club when he netted a diving header in the 1991 Scottish Cup Final. As he won the ball, he got caught up in the carnage of United’s defence trying despairingly to clear the ball. It was Ally McCoist on the BBC TV commentary that would coin the phrase “as brave as a lion” as he bravely nodded the ball home. The side of course went onto beat Dundee United 4-3 in arguably the greatest Scottish Cup Final.

Phil proved to be a real talent as his strong running ability and inch perfect distribution ensured he was one of the first names on Tommy McLean’s team sheet.

The following season proved to be quite fruitful for O’Donnell personally as not only would he represent Motherwell in their first ever European tie when he featured against Polish outfit GKS Katowice but he was also recognised at international level when he was capped for the U21 side, he would eventually go on to win eight caps in total. Furthermore at the end of the 1991/92 season he was voted the Supporters Association Player of the Year as well SPFA Young Player of the Year an award he would win again at the end of the 1993/94 season.

On the 8th September 1993 he made his full Scotland debut when he came on as a late substitute against Switzerland.

Phil was part of the side that finished 3rd in the Premier Division in 1994, only four points behind champions Rangers and one point behind 2nd place Aberdeen. Nevertheless the club managed to clinch a European place.

It was no secret that Celtic were interested in him, this was further fuelled when he played the proverbial blinder against them in January 1994 where his two goals secured a 2-1 win.

At the beginning of the 1994/95 season a new manager had now arrived in the shape of Aberdeen legend Alex McLeish, it was said at the time that ‘Eck’ would only accept the role on the provision that Phil was not sold as he was eager to build a side around him, as it happened he played in some of the early league fixtures and one tie in a UEFA Cup tie against Havnar Boltfelag. As a glamour tie against German side Borussia Dortmund lay in wait, O’Donnell was surprisingly sold when McLeish had a change of heart. A bid of £1.75 million from Celtic was accepted in September  1994, the transfer would break the previous fee received by some distance.

O’Donnell would arrive in Glasgow at a time when Celtic were enjoying some new investment, he would win another Scottish Cup this time when the Bhoy’s defeated Airdrieonians 1-0 in the 1995 final. Perhaps the greater achievement was stopping Rangers winning ten in a row when they won the league title in 1998.

Having failed to agree a new deal at Parkhead, O’Donnell headed to the English Premier League in the Summer of 1999 to join Sheffield Wednesday, while at Hillsborough Phil was dogged by injury and in three years he would only make 25 first team appearances before departing in 2003.

Returning to Lanarkshire, Phil asked the Motherwell staff if it was possible to use the facilities to aid his rehabilitation which of course was immediately granted. ‘Well boss Terry Butcher was impressed by the veteran midfielder, so much so that he said that a deal would be on the table should he prove his fitness. In January 2004, O’Donnell officially signed with the club for a second time, he went straight into the squad to face Dundee United on the 3rd January, coming on as a substitute on the 79th minute he got to celebrate a goal by his nephew David Clarkson who had just completed a perfect hat trick in a 3-1 victory. Prior to this game, Phil’s last competitive outing was just shy of two years earlier when he played for the Owls against Blackburn Rovers.

Nicknamed ‘Uncle Phil’ as he played alongside his nephew, it was not only Clarkson that was a professional footballer around this timeframe, his other nephews included former ‘Well defender Brian Dempsie and Dundee United midfielder Stephen O’Donnell.

In his second spell he would go on to enjoy many more years in claret and amber, the guile, experience and work ethic provided proved to be invaluable. He no longer possessed the pace of his youth but his footballing brain brought another dimension to the side and many youngsters profited. In 2005 he was a League Cup Final runner up as the side were heavily beaten by Rangers, for the best part the side were really comfortable in the SPL but one season under Maurice Malpas seen a close call with relegation. After Scott Leitch retired from playing football, Phil was installed as the new club captain.

Under the guidance of Mark McGhee the side played some magnificent attacking football, the manager went as far as saying it was the first time that O’Donnell had shown the same kind of form that he did in his first spell. All the more impressive considering he was now in his mid 30s. The side were in contention for a European spot as they were flying high in the league. Tragically however on the 29th December 2007, Phil collapsed on the pitch at Fir Park just as he was about to be substituted in the 78th minute of the match against Dundee United. Despite the match carrying on, horrible news was to filter through as he was sadly pronounced dead at Wishaw General Hospital at 5:17pm

Tributes poured in from all over the globe in honour of the Motherwell captain, many tributes such as flowers, shirts with messages, flags etc.. were laid outside the Main Stand. The side would play fixtures for the rest of the season with his signature embroidered on the front of shirts. The Main Stand would be subsequently renamed ‘The Phil O’Donnell Stand’ with a memorial being erected in November 2011. David Clarkson would use the number ten on his jersey throughout the 2008/09 season but after he departed Fir Park the number had since been retired.

On the 25th May 2008 a benefit match was held at Celtic Park in memory of Phil with the proceeds from the match going to various different charities. Celtic had a squad made up of the 1998 league winning side and Motherwell had 1991 cup winners and a number of former team mates and family members. The game drew an impressive 60,000+ attendance as Celtic won 5-1.