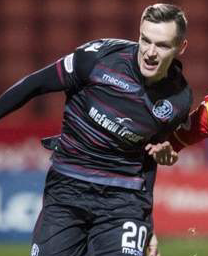 Deimantas Petravičius signed for Motherwell on a one year deal on the 22nd August 2017 after impressing the coaching staff whilst on trial with the club. The 21 year old had come through the ranks in England with Nottingham Forest whom who he joined in 2011, he did make the breakthrough into the first team at the City Ground but this was limited to just the solitary appearance and he would struggle to make any real impact, he did have a brief loan spell with Stevenage in 2016 before he was released by the club, his next port of call was to try his hand in Polish football with Zagłębie Lubin but again the youngster failed to nail down a first team berth before leaving the club.

By the time Deimantas joined the Steelmen he had actually managed to obtain more international caps with Lithuania’s senior side than he had club appearances. He had also been capped at u17, u19, and u21 level. He made his Motherwell debut against Hibernian on the 28th October 2017 coming off the bench in a 0-1 defeat. Capable of playing either as a winger or in a forward role, he possessed lightning pace and added a different dimension to the clubs attacking options, unfortunately he struggled to make any real impact with the club as he made the vast majority of his appearances from the subs bench, his name was on both team sheets for both the League Cup Final and Scottish Cup Final during the 2017/18 season but he wouldn’t see any action. At the end of the campaign he was released but quickly headed to Championship side Falkirk.