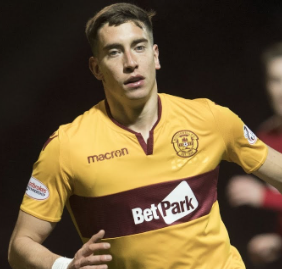 Alejandro, or Alex for short was no stranger to Motherwell when he arrived at Fir Park during the Summer of 2018. The Spanish midfielder had actually linked up with the squad during their January 2018 winter training camp in Tenerife, he impressed the clubs management sufficiently as he was offered a contract but he opted to head to Eastern Europe where he joined Sepsi OSK in Romania.

The 25 year old Gorrin accepted a one year deal in June 2018 when the club approached him a second time. He made his ‘Well debut on the 17th July 2018 in the League Cup group stages as the side played host to League Two outfit Edinburgh City, Motherwell proved to be too strong and romped to a 5-0 victory.

In his early ‘Well career he failed to carve out a regular starting berth as the side struggled in the first half of the 2018/19 Premiership season, but when manager Stephen Robinson changed to a more attacking formation in January he would flourish in a youthful attacking side that went from possible relegation contenders to top six challengers.

Alex would play in a anchor midfield role, he had fantastic ability at spraying long passes about with great accuracy which helped wingers Jake Hastie and Gboly Ariyibi excel. He wasn’t one to shirk out of a challenge which made him no stranger to receiving a yellow card. At one point he enjoyed a run in the side when they went on a of five league fixture unbeaten (albeit the run was actually longer, but Gorrin had missed a few of these games).

His last action for Motherwell was to play in an exciting 4-3 win over Dundee at Fir Park, despite the result the Spaniard was sent off just around the hour mark. Gorrin was offered a new contract with the club but he opted to move to English League One side Oxford United where he would link up with former ‘Well team mate Chris Cadden.