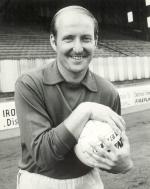 Billy Ritchie joined Motherwell in August 1970, he was a fringe player during his tenure at Fir Park as he was very much into the veteran stages of his career. He initially helped the side cope with a minor injury crisis before he himself was struck down with a broken leg in a match versus St Johnstone at Fir Park on the 29th January 1972, Joe Wark had to deputise but the side managed to record a 2-0 win. Billy would also enjoy a spell as goalkeeping coach at Fir Park where he helped develop the likes of Stuart Rennie.

Ritchie is probably best remembered for his 13 years at Ibrox, where he had won a string of honours and represented the Govan outfit in the 1961 European Cup Final which they lost over two legs to Italian outfit Fiorentina, upon his departure from Ibrox he served Maryhill side Partick Thistle, Billy brought his senior career to end after a spell with Stranraer.