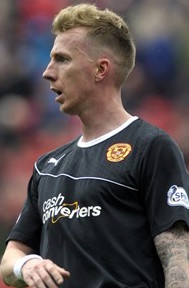 Craig Reid’s time at Motherwell is perhaps best remember for one moment. 11th May 2014, Motherwell travelled up to Aberdeen looking to earn all three points which would see them leap frog the Dons who were currently occupying the 2nd position in the League table. In a tense affair, the game went by with Aberdeen being the more threatening side but the 0-0 score line obviously suiting the side from the north.

Deep into injury time Motherwell won a free kick in their half, ‘Well captain Keith Lasley slung a long ball into the box which quite astonishingly hit the crossbar after ‘Well forward John Sutton and Aberdeen keeper Jamie Langfield missed it after colliding while challenging for the ball. Fraser Kerr’s follow up effort was stopped on the line as former Steelman Mark Reynolds handled it and just as it looked like referee Steven McLean was just about to award a penalty, Craig Reid pounced to bundle the ball to send the large ‘Well following into bedlam. 2nd place secured and the additional £250,000 in prize money was most greatly received.

Aberdeen of course felt aggrieved as they felt their keeper had been fouled, but in Motherwell’s eyes whether or not it was a foul was up for debate but justice was certainly done as in the reverse fixture at Fir Park in January, Dons skipper Russell Anderson managed to steal a last minute equaliser by using his hand to blatantly punch the ball over the line.

Craig had began his career in the Celtic youth system but like many before him he failed to make any impact at Parkhead before trying his hand with lower league clubs. He joined Motherwell on the 21st February 2014 on a short term deal until the end of the season, he would actually make his debut the same evening he signed as he came on as a substitute in a 3-1 defeat at the hands of Dundee United at Tannadice.

Craig had actually been training with Motherwell at the beginning of the 2013/14 season and appeared in a friendly fixture, Stuart McCall later said he was eager to sign the defender but as the club had sunk a huge chunk of their finances into signing former Celtic captain Stephen McManus this effectively scuppered the chances of Reid signing as any available funds were needed to strengthen different areas.

On the back of the winning goal at Pittodrie, he effectively won a two year deal. Craig was capable of playing at centre back and right full back, on occasion even filling in as a defensive midfielder. He wasn’t a spectacular player by any means and had his limitations but you couldn’t fault him for giving anything less that 100% effort. His first full season with the club was a struggle as the club battled against relegation, ultimately new manager Ian Baraclough would ring the changes and it was clear Craig wasn’t in his plans.

Reid would have a short loan spell at Championship club St Mirren before being released on the 1st February 2016, he would later have spells with Dunfermline Athletic and Keflavík in Iceland where he briefly linked up with former team mate Stuart Carswell.