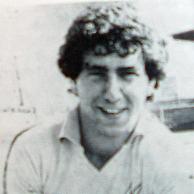 Willie McLean signed the left winger from Rangers in 1977, Jimmy Robertson unfortunately didn’t make any real impact for the club as he only played five games without out scoring. After departing Fir Park, Jimmy joined Stranraer and then onto Queen of the South.

Jimmy went on to have an illustrious career with the Doonhamers playing 378 games and scoring 89 goals for the Dumfries club. He had two spells with Queens initially joining in 1981 until 1988 and returning again in 1989 after short spells with Morton and Clydebank.