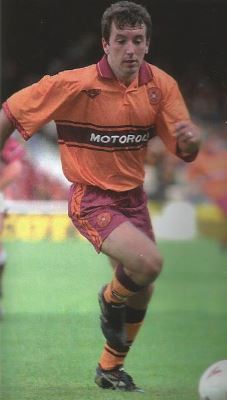 Raised in Bellshill, Rab joined Dundee from schools football and he was a regular in their first team as a teenager. He also added Scottish under 21 caps to his youth awards. In 1991 Rab moved to Dunfermline Athletic but within months he was sampling relegation for the second time in his career. In July 1993, Tommy McLean signed Rab for £85,000, by this time he was a vastly experienced player. He was capable of playing in midfield although he was a full back. With Motherwell he showed himself to be determined, industrious and clever on the ball. Rab played under Alex McLeish as well before linking back up with Tommy McLean at Dundee United. Perhaps not the most spectacular of players, he was nevertheless a very reliable one. In 1999 he joined East Fife where former ‘Well team mate Stevie Kirk was the manager, when Kirk was dismissed he assumed the mantle himself.