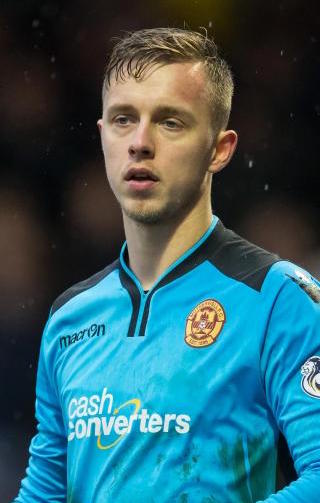 Dan Twardzik comes from a footballing family as his father Rene was also a goalkeeper, his twin brothers Filip and Patrik were on the books at Celtic.

Dan started his career training with German giants Bayern Munich but after his release he actually arrived at Fir Park in 2009, he impressed the coaching staff and the club were eager to sign him but any chance of the deal happening was scuppered due to compensation issues.

It wasn’t until the end of the 2014 when Twardzik arrived back at Fir Park, both ‘Well keepers Gunnar Nielsen and Lee Hollis were ruled out by injury and the club managed to bring Dan in on loan from Dundee on a one months emergency loan. The short spell was indeed fruitful as Twardzik made five appearances during this spell, quite amazingly the club won everyone of these fixtures. Dan made his Motherwell debut against Ross County in a 2-1 win, the other results included were a 3-0 vs St Mirren, 1-0 vs Aberdeen, 5-1 vs Partick Thistle and 4-0 vs St Johnstone.

The two permanent keepers the club currently had on the books had failed to convince the ‘Well faithful that they were up to the task, it was hoped the young keeper could stay on longer but despite the club making noises about extending his loan nothing would ever materialise. Perhaps not so surprisingly having three goalkeepers on board is a luxury Motherwell could ill afford when other positions needed addressing.

It was no surprise however that manager Stuart McCall swooped for his signature in the summer of 2014, instantly installing him as his number one after his release from Dundee.

Despite being 6 foot tall most ‘Well fans were of the opinion that he was too small to be a keeper, this mainly originated after the Steelmen were beaten by Stjarnan in the Europa League when a long drive managed to deceive him, a similar effort against Kilmarnock weeks later had a similar result which had many grumbling about his lack of presence between the sticks.

During his permanent spell his best performance for the club came in a Scottish Cup game against Dundee United where he saved countless one on ones from the Terrors due Stuart Armstrong and Gary Mackay-Steven but sadly the side fell to a 2-1 defeat. The 2014/15 season was a struggle for the club as relegation looked a real possibility, when new boss Ian Baraclough was appointed he would replace Twardzik with George Long but even this change didn’t seem like a massive upgrade.

Dan was released by the club on the 26th January 2016 after he had fallen well down the pecking order behind Connor Ripley and Craig Samson. He made 34 appearances in all competitions. Sadly after leaving Motherwell injury seemed to scupper a number of potential moves.

Despite being born in the Czech Republic, Dan had opted to play for Germany where he also claims nationality, he had won two caps for German u18 national side.