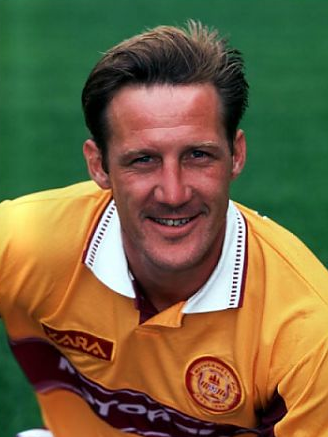 Defender, Shaun Teale was a late started in the senior game as his early career began in the English non-league representing the likes of Southport, Northwick Victoria and Weymouth before joining Bournemouth as the age of 24. Shaun would go onto play in an Aston Villa side which would finish runners up in the English Premier Division in 1993, only a year later he would enjoy League Cup success with the Villans as they beat Manchester United in the 1994 final. Teale would eventually slip out of the starting eleven.

The experienced centre back would later serve Tranmere Rovers and Happy Valley in Hong Kong before he arrived in Lanarkshire. It was Finnish manager Harri Kampman that brought the Englishman to Lanarkshire in August 1998 when he was 34 years of age. He would make his first team debut in a 1-0 win over East Fife in the League Cup, he quickly became a popular player amongst the fanbase due to his effort and commitment to the cause as well as showing real energy and a robustness when defending which made him a difficult opponent. Shaun certainly played his part in turning the sides fortunes when they went from potential relegation candidates to a side that would move up to safety.

Despite being a defender, Shaun was confident from the spot and when an opportunity presented itself he was happy to step and take one. While at Motherwell he enjoyed 16 great months but it would ultimately end in a sour note as he had a falling out with manager Billy Davies and chairman John Boyle over a new contract.

In February 2000, he was allowed to depart the club quickly signing for English Third Division side Carlisle United. Upon hanging up his boots, Teale would dabble in coaching at various sides.