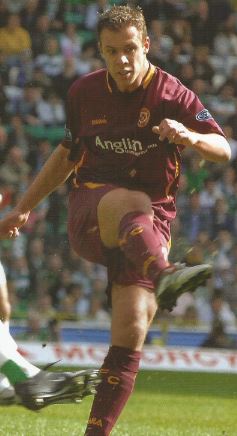 Hungarian Midfielder, Krisztián Vadócz joined the club on loan in January 2007 when manager Maurice Malpas brought him in from French club Auxerre. Malpas having previously been manager of Scotland U21s had seen the youngster against his side and stated he was impressed by him. Despite being named as a substitute on a few occasions he would have to wait a while before he made his first team debut, he had been frozen out of the first team at Auxerre and struggled with fitness. It was early march when he finally made his debut, he showed up really well, clever on the ball and a solid tackler, and he quickly became a fans favourite. After some impressive performances in Claret and Amber he got called up to the Hungarian national side where he would win his first cap against Moldova in a 2-0 victory. The 2006/07 season is a year all associated with the club would rather forget due to being dragged into a relegation fight. Krisztián was perhaps one of only a few bright sparks to remember during that frustrating campaign. He would go on to forge a good career playing for Osasuna in Spain, NEC Nijmegen in Holland and Odense in Denmark as well as becoming a regular fixture in the Hungary side. He had also been capped at U21 level by his national side.