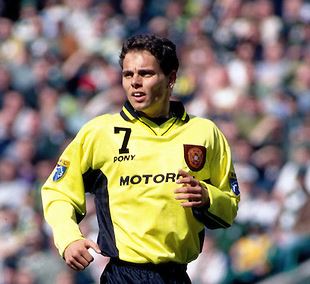 Simon Valakari was signed by Alex McLeish in February 1997, the Helsinki born midfielder came from his native Finland where he was playing for a club called Finn Pa. He was signed as a holding midfield player and he was billed as the player to replace the likes of Colin O’Neill and Jamie Dolan. Simo wasn’t as hard a tackler as these two but he did hand out a fair few of crunching tackles.

He proved to be an industrious addition as not only did he prove to be a fine passer and interceptor, but his consistency made he a popular player. While at Fir Park, he represented Finland on a regular basis, to such an extent that his 15 caps made him the clubs most capped player this record was surpassed a number of years later by Stephen Craigan who would go onto make an amazing 51 appearances (54 in total) for Northern Ireland. Astonishingly in all his 119 appearances he made for Motherwell he never scored a single goal for the club.

In the latter part of the 1999/00 season, many admirers came to the fore, it was frustrating as manager Billy Davies had stalled on offering Valakari a new contract and thus decided to move onto pastures new, he was offered a deal that he couldn’t refuse when English Premier League side Derby County swooped for his signature. As luck would have it, within only a handful of games for the Rams he scored a stunning goal against Middlesbrough. Sadly his career at Pride Park was curtailed by injury for large parts and he didn’t get to make the impression expected. After Derby he enjoyed a spell in the United States with Dallas Burn before retiring at Turun Palloseura.

Simo tried he hand at management after hanging up his boots winning a number of honours with Seinäjoen Jalkapallokerho, he was interviewed for the Motherwell job in early 2017 but he missed out as Stephen Robinson would take the reigns.